I live in Cambridge in the United Kingdom. My studio is a traditional artist’s attic at the top of an old Victorian House. From this room of my own I create jewellery that is worn and loved in many parts of the world.

As a child I was fascinated by the contradictory nature of jewellery. It seemed a superficial adornment, something added after fundamental needs had been met, but when I visited museums and saw the galleries of ancient civilisations, it was the jewellery that had survived; it revealed the identity of those that wore it, when they had long since vanished.

Jewellery is a form of self expression both for the maker and the wearer. I make jewellery because it is my way of turning ideas into real things which give pleasure to other people who bring it to life. 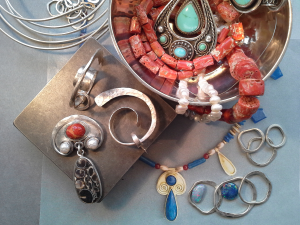